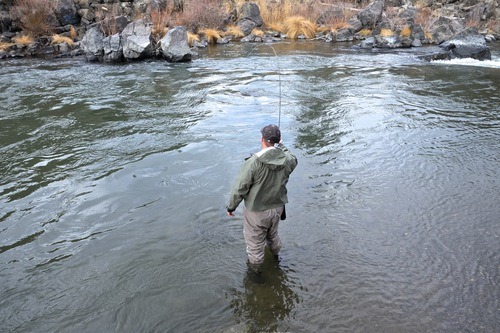 The storm of the century my ass. Frustrated to say the least. This last storm never pushed over the crest and to the east side here in Hirschdale. They didn’t even get any snow in Truckee. Usually one inch of liquid equals a foot of snow, do the math. We would have had a shit ton of snow if it pushed over the crest with a westerly flow. It didn’t, the storm had a southern flow, and we’re stuck with what we got. While the rest of California had rain of biblical proportions, it just didn’t add up as snow in the mountains. Sugar Bowl did alright, 20″ inches maybe, and Squaw and Alpine 16″ inches, which eventually drains into the river. Everything here on the east side of the crest got nothing, some good rain, but no snow. Northstar, Mt. Rose, they barely got hit. Hopefully, Mt. Lola and that stuff up north got some good snow, that drains into Stampede and eventually the Truckee River. As far as the river goes, it barely came up. It should be COMPLETELY blown out with a storm of that size. We didn’t get lucky on the east of the crest with this one. It’s better than anything we’ve had, but we need snow, rain don’t mean shit, if we except to be fishing the Truckee River next summer. It’s frustrating realizing what we could have had. Remember when Truckee was the coldest place on earth? That’s what it said on my Tourist Club sweatshirt, and damn if it wasn’t true. Let’s hope next weeks storms which will be cold will add some more snow to the mountains. The Good news is the Truckee River is in prime shape. Just over 350 cubes here in the Hirsch, great for this time of year. The fishing seems to be getting better as she is just getting back to her old self. Been doing a few guide trips here and there and swinging some up on the switch rod. Some more on the swinging and some classes soon. Come up and take advantage of my winter rates.