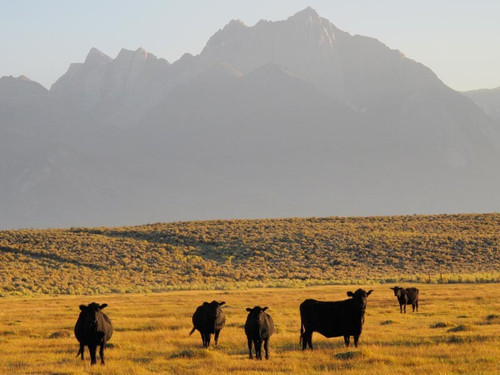 On Saturday evening, there were a lot of trout celebrating the end of the fishing season. Gone are the crowds secretly sneaking fish to their coolers to “conceal” their fish limits, gone with their cigarette butts, empty beer cans, and gobs of fishing line that get thrown into the water or left along the shorelines, gone is my respect for the American “sportsman.” Where is the reverence and respect for enjoying the mountain environment? We as anglers and avid outdoorsmen need to educate our children and the public to have some respect for the land and for the other people wishing to enjoy a pristine experience. Anyway…. along with the local trout, I too am celebrating an end to the season. Let the cleanup begin.

The Owens River system, with the exception of Crowley Lake, will be open all year long as well as the East Walker and Hot Creek. Hot Creek and the East Walker need some more water to improve the health of the fishery, most likely early in the spring as the runoff starts to pump water into the rivers, creeks, and reservoirs. Keep your fingers crossed for a good winter with lots of precipitation.

Lower Owens River
The river has been running steady at 85 cfs, not the optimum flow, but still healthy. The high mountains in the Sierra received about a foot of snow a couple of weeks ago and the morning temperatures have dropped considerably. Use some stealth when fishing. Approach the water with light feet and watch where your shadow is falling on the water. The trout are a little edgy with the lower, clear water. That said, It is easy wading and the river is “grabby” again. There is about a two hour window, right around lunchtime, that the BWO’s start lifting off the water and the trout snouts start poking out of the water. You want some ridiculous dry fly fishing? Come on over the hill. One of my favorite mayfly patterns, the hackle stacker, works like a charm, sized 18 or 20. For indicator nymphing, tie on black zebra midges in the mornings then make a bug adjustment as the temperatures rise. The browns have been sucking down BWO’s like there’s no tomorrow. Mercer’s micro mayflies are killer along with small PT’s.

Upper Owens River
Big fish are on the move, coming out of Crowley Lake and spreading out throughout the river system. There are a lot of fish up high in the river system, above the Hot Creek Confluence and the Longyear Ranch. This part of the river is flowing steady at about 50 cfs. The water is cold and clear, as with the lower Owens, exercise some stealth. The most successful fishing is in the faster, disturbed water and the shady undercut river banks. Because the water is so transparent, these areas give you the best cover to make your drifts. Copper johns, prince nymphs as attractors with drowned trico or baetis spinners worked well in the morning. Try hucking out streamers like a black wooly bugger, below the Monument down to the lake. Use a short leader with 3 or 4x with your streamers….. when they grab, they crush. Hang on.

Crowley Lake
I had to fish the reservoir one last time before the gates get closed for the season. I was not disappointed. I initially threw out a flashback pheasant tail with a black zebra midge dropper, usually a reliable combo. However, I got no lovin’ until I switched to a #18 hare’s ear, light tan in color. This along with some subtle stripping, “Blamo!” Later, I started hucking out a hornberg, sunk with a small split shot, and got several nice fish with that setup as well. Very nice trout. It was a nice way to close out the stillwater season. 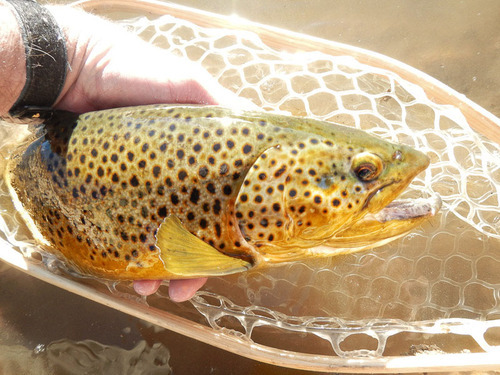