Written by George Revel
Filed under
Eastern Sierra
Previous
Jim Stimson, Jim Stimson Fly Fishing
Last week I put aside my trout gear and hastily packed for the Trinity River in search of some steelhead; chrome ghosts, silver bullets, metal heads, the fish of a thousand casts…. There’s a certain awe and reverence with steelhead. There’s nothing better than hooking into a salty, turbocharged rainbow on steroids. Nothing. It is mesmerizing watching your line slowly swing across the river, lazily and seductively moving thru the current. It is almost hypnotic and cathartic until you get a grab. Then you snap out of your stupor and it’s game on! The water explodes with the fury of an angry fish. I toss and turn at night thinking about fishing for steelhead.

Lower Owens River
The river has been running at a nice, steady 85 cfs, a healthy, winter flow. With any luck, our part of the state will get some much needed snow early next week. The nighttime temperatures are getting below freezing but the afternoons are really pleasant. There tends to be a nice mayfly hatch during the lunch hour. Depending on how prolific the hatch is, there can be some great action with dries. Parachute Adams, hackle stackers, anything mayfly-ish in a BWO pattern, sized #18 will get it done. For nymphing try Barr emergers, Mercer’s micro may’s, juju baetic, etc… Use some stealth when fishing. Approach the water with light feet and watch where your shadow is falling on the water. The trout are a little edgy with the lower, clear water. That said, It is easy wading and the river is “grabby."
Upper Owens River
Big fish are on the move, coming out of Crowley Lake and spreading out throughout the river system. This part of the river is flowing steady at about 50 cfs. The water is cold and clear, as with the lower Owens, exercise some stealth. The fish tend to hang out now in the slower moving water coming out of tail outs. They are stacked in these deeper pools but tend to be jaded when it comes to eating. Be patient, let them get used to your presence. Keep casting and drifting…. if you find the right depth and can place a bug in front of their snouts, they’ll usually eat it. Copper johns, prince nymphs work as attractors with the good ‘ole zebra midge as your dropper. It gets midgy out there in the mornings. Look for BWO’s as the day warms up.
Now get out there! 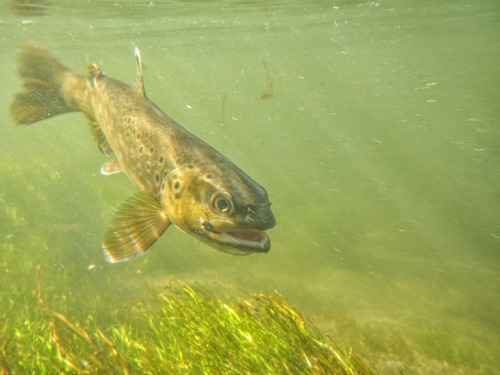