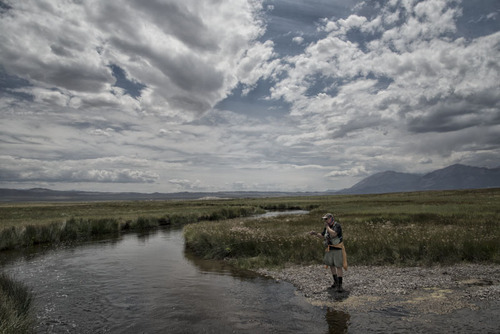 So there we were, fishing the Upper Owens River…. I had a father-son beginner’s trip. We had spent the morning at the baseball field learning to cast, how to hook, play, and release trout, then we adjourned to the river. The day was warming nicely, my clients were getting the hang of casting to water (not grass), learning to mend, and getting the concept of a good drift. Low and behold, both clients hooked into (and lost) some nice trout. I was thinking to myself, “What a great day! What could possibly go wrong?”

We meandered upstream, prospecting for wary rainbows. Usually, we are in the water, wet wading, standing in perhaps ankle to calf deep water. But there was this nice riffly tailout that dropped into a deep bucket. A perfect holding lie for a gaggle of fish. If it were me, I would have walked downstream a ways, forded the river, walked back upstream, then cast from the water. Easy right? However, the father in the group had an Ace Bandage, wrapped up knee and was hobbling along. Hopping in and out of the river for him was painful to watch. So I placed him on the bank to cast, which was a couple of feet above the river level. Did I mention, “What could possibly go wrong?” I handed him the fly rod and instructed him where to cast. I stepped back to observe…. All of a sudden he lets out a wail, “Awwwwwww!” The next thing I know, in the blink of an eye, he falls head first into the hole. He completely disappeared under the water! His hat surfaced first, followed shortly by his face gasping for air. He was soaked but unharmed, other than damaged pride. The trout scattered of course but after getting him dried off, recovering my fly rod, having some lunch, we headed off to some new, undisturbed water. We had a great afternoon. Both father and son hooked (and landed) several nice rainbows and cuttys, first fish on a fly rod. My clients were introduced to not only fly fishing but full immersion, wet wading.

Hot Creek: It is fishable, in spite of the skinny, weed choked water. A dry dropper combo worked well, placed in the lanes between the weed banks. Try a stimulator with a Hot Creek Caddis tied off the hook bend. And believe it or not, streamers were working well too. Look for the deeper buckets and let the streamer swing through the holes. Use floating line to keep your bugs from sinking too deep. Black wooly buggers with a tan Bird’s Nest tied off the bend were getting crushed.

Upper Owens River:  The flows are meandering along at 55 cfs, a mere semblance of what it should be. The river is skinny but there are plenty of fish stacked in the deeper pools at the tailouts. If you can hook into one rainbow, with persistence, you will most likely get a few more grabs. Keep grinding away, they’re in there. Again, look for deeper pools, tailouts, and undercut banks to find the trout. With the lower flows, try approaching these areas with a little more stealth. That means walking quietly along the river banks, approaching the fish from below, and keep the splashing down to a minimum. The trout are “edgy” now with the boney water. But they still need to eat. Fish accordingly. Nymphing will be the most successful for the bigger fish. Pheasant tail, caddis worms, hare’s ears, zebra midges, WD’s, all work well.

Lower Owens River:  The fishing down by Bishop has slowed a little but the quality of the fish are great. The afternoon temperatures are getting into the low 100’s. Wet wading is the way to go. The warmer temps bring out the caddis and stoneflies along with aggressive takes. The river tends to fish best in the mornings and early afternoons with a progression of midges, tricos, then mayflies. The later afternoons become a grind as the trout seem to take their siestas and are not interested in anything you can throw at them. Look for trout to rise in quiet backwaters and river margins in the evenings. Elk hair caddis and Stimulators work well if you can get a good drift. For indicator nymphing, yellow sallys with bright green caddis worms dropped off the hook bend have been killin’ it. Finding the right depth and drift is the key. Vary your depth with your indicator and split shot. With the rise in water temperatures, the trout are favoring the shallower, riffled water. They need the cooler, oxygenated water. Try a dry-dropper setup such as a hopper-caddis dropper.

San Joaquin River:  The flows are at about 25 cfs, about the same as a low flow toilet, kidding. Try fishing lower on the river, like the Rainbow Falls area. There are side creeks coming out of the backcountry that add to the amount of water heading downstream. Attractor patterns work very well. The fish are looking up, go huck some dries with droppers.

East Walker:  The river is steady at 65 cfs, not the best flows for this stream. And, with the Bridgeport Reservoir getting lower and lower, it will be interesting to see if there will be a trout die-off later this summer. Unlike most tailwaters, the East Walker is being fed with water high in the water column; warm, tepid water. Most dams release water from the bottom which is cold. Combine this with high summer temperatures, the trout cannot get enough oxygen. The bottom line is, if you insist on fishing in these conditions, be aware, the mortality rates start sky rocketing. Give these poor trout a break. Don’t fish at all or hit the river early in the morning.

The Backcountry: Grab your daypack, snacks, plenty of water and sunscreen and head to the high country. If you know where to go, and I’m not going to spill any secrets or post GPS coordinates, you can catch anything from cutthroats to golden trout, rainbows to brookies. Some lakes require a massive effort, others are a quick jaunt up the trail. There are few lakes that don’t have trout. Most importantly, get out there, explore, enjoy it.