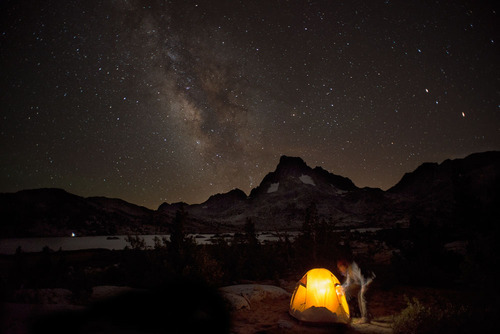 Hot August Nights
As we turn the corner on August, there are signs that autumn is upon us. The sun is lower on the horizon, the shadows grow longer, and the aspens on the high slopes are starting to turn. This has been a tough summer for the local streams and rivers. With year three of a severe drought raging in California, we look forward with crossed fingers for a “normal” winter. Some of my favorite waters to fish are teetering with the possibility of late summer fish kills, the East Walker in particular. The Bridgeport Reservoir normally sends down copious amounts of cold water and the large population of brown and rainbow trout thrive. This season however, the reservoir is a mere pond. Warm water trickles into the East Walker now ….  the fish are surviving, but barely. One of the most useful tools you can carry with you in the Eastern Sierra is a thermometer. If you fish the East Walker, get there early, really early. The water temperatures are usually in the upper 60’s in the morning, however, as the day warms up, so does the water. About lunch time, you will notice the water isn’t as “grabby” as before. Pull out your thermometer and plop it into the water. Hmmm…. now the water is in the low 70’s. If you do hook a fish, notice how they are desperately gasping for oxygen. Upon release, they swim away slowly, OR, they take a long time to recover, if at all. Well now…. perhaps you shouldn’t be fishing at all. Why? Because the mortality rates start climbing as the water temperatures rise. All I’m saying is fish with some responsibility and ethics. Educate yourselves, pick a stream that give the fish a chance.
The Upper and Lower Owens River systems are healthy and are fishing well. Personally, I would avoid the East Walker for the rest of the season or until the temperatures start freezing at night. Hot Creek, in spite of low, weed choked water (sounds inviting, right?), fishes well early and late as the fish look skyward for caddis. Tie on a small stimmy and trail a cdc caddis off the hook bend. Look for the deeper buckets for holding fish, but that said, if you can carefully place a cast within the lanes between the weeds. Whack! Try really short drifts. With any of these streams, the water temperatures are higher. Expect to find trout hanging in the tail-outs after riffles. This turbulent water provides not only the food pipe for fish, but oxygen. ‘Nuff said, I’ll step down from the pulpit. Get out there, have a great time, fish with some compassion, and perhaps hit some of the high lakes in the backcountry. Let’s hope for a big winter.