WHAT FLY LINES TO USE FOR FLY FISHING THE SURF

Fly fishing our local beaches and bays is a great way to get your fishing fix. One of the most common questions we get on fishing the surf is about what lines we use. Our line system of choice is an interchangeable Rio Outbound Short Shooting Heads as we fish a lot of different beaches and a lot of conditions. If you stick to one beach or bay it is quite possible you could get away with just one head or an Integrated outbound short shooting head line. There are no shortage of lines out there, but most are not well suited for fishing California's bays and beaches. 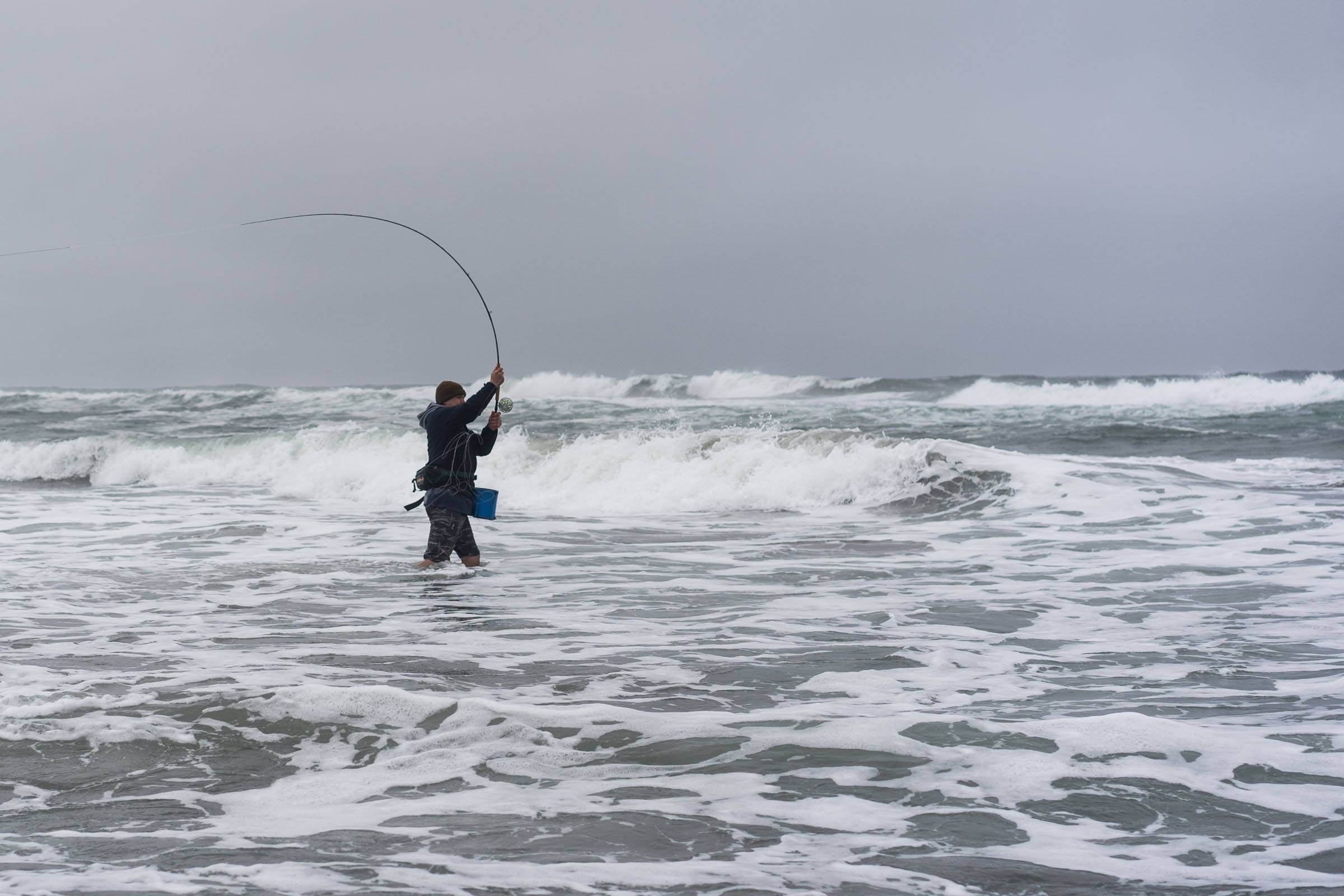 Shooting heads are very short fly lines, 25' to 35' in length, designed to be cast, or "shot," the greatest distances using fast action fly rods with minimal false casting and minimal backcast room. The shooting head is attached, usually by a loop-to-loop connection for a quick, convenient exchange, to a thin running line that has minimal surface contact with the fly rod guides, thus achieving the long distance casts. When considering the geometric taper of a shooting head, think "cannonball at the end of a string." Shooting heads are also usually designed to sink, and a selection of various densities allow the angler, with one reel and spool, to fish a variety of water depths and water speeds. Shooting head systems are often used by steelhead and salmon anglers, with either single-handed and spey rods. If you want to learn more about steelhead and spey line systems click here. Lake, fly anglers as well as striper fly fishers will also benefit from casting a shooting head system. Shad anglers and surf anglers   The only con of the interchangeable shooting head system is the loop to loop connection between the running line and the head can take some getting used to. When the connection is set up properly it goes through without much trouble.

Much debate on running lines. We carry every running line possible, but I think only a few are worthy of your consideration.

There are 3 basic types of running lines:

Nylon Mono (flat and round) - You will get your best distance with this style as it shoots well and requires less power in casting. It can be tangle prone. Make sure to fix any tangles while it's loose and don't tighten the tangle or tangles will become more frequent. It can be hard to hang on to in cold conditions or if you have bad dexterity.

Fly Lines Style -It's thicker and tends to be less tangly. The weight and thickness of this style running line will cut down on your distance, but much easier to hang on to in cold conditions. For a surf specific set up get an intermediate sinking running line if you are looking to have it double as a spey setup, go with a floating.

A hollow nylon, this stuff shoots well, knots well, and lasts. It has a 50m marker making it easy to fill two reels off one spool.

Pretty much standard nylon mono that shoots well and is easy to hang on to. Great color that pops and helps you track in the surf.

A fly line style running line that sinks at 1-2 inches per second this will help you get down.

Cheap and easy this Rio Slickshooter works great and is inexpensive. Great for the budget conscious angler. I like the 50lb.

Sold out
SHOP ALL RUNNING LINES 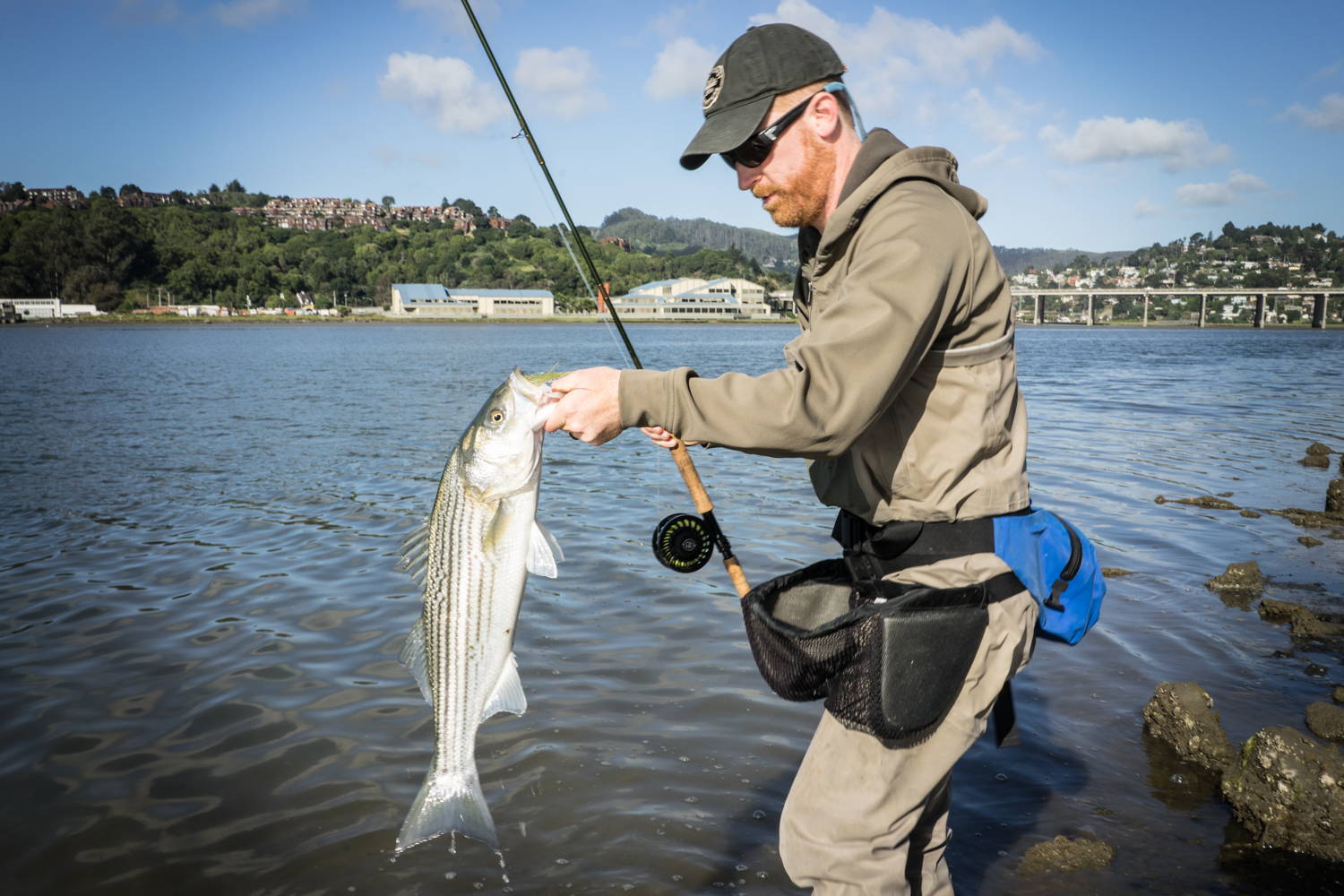 Choosing the right sink rate to get, and keep your fly in the zone is an important consideration. So we wanted to take a moment to explain the different sink rates. Generally speaking if the water is less turbulent/ shallow you will want a line that sinks less. The opposite is true for more turbulent and deeper water, where you will want a line that will sink faster. Faster sinking lines have a thinner diameter so they will help cut through very windy conditions. There are two components to consider with shooting heads the first would be grain weight, this is essentially how heavy the line is. For example most 8wts will cast between 300 and 350 grains. The Rio Outbound short in an 8wt comes in at 330grains which we find to be just right for modern 8wt rods. If you have any questions on this we are happy to help. The second consideration is density, an 8wt head that weighs 330 grains can come in several densities that control how quickly the line sinks. The fastest sinking lines cram 330 grains in the smallest diameters. Below explains all the sink rates.

If you are a roaming Bay Area angler who likes to fish in the delta, bays and rivers we consider the following shooting heads must haves: 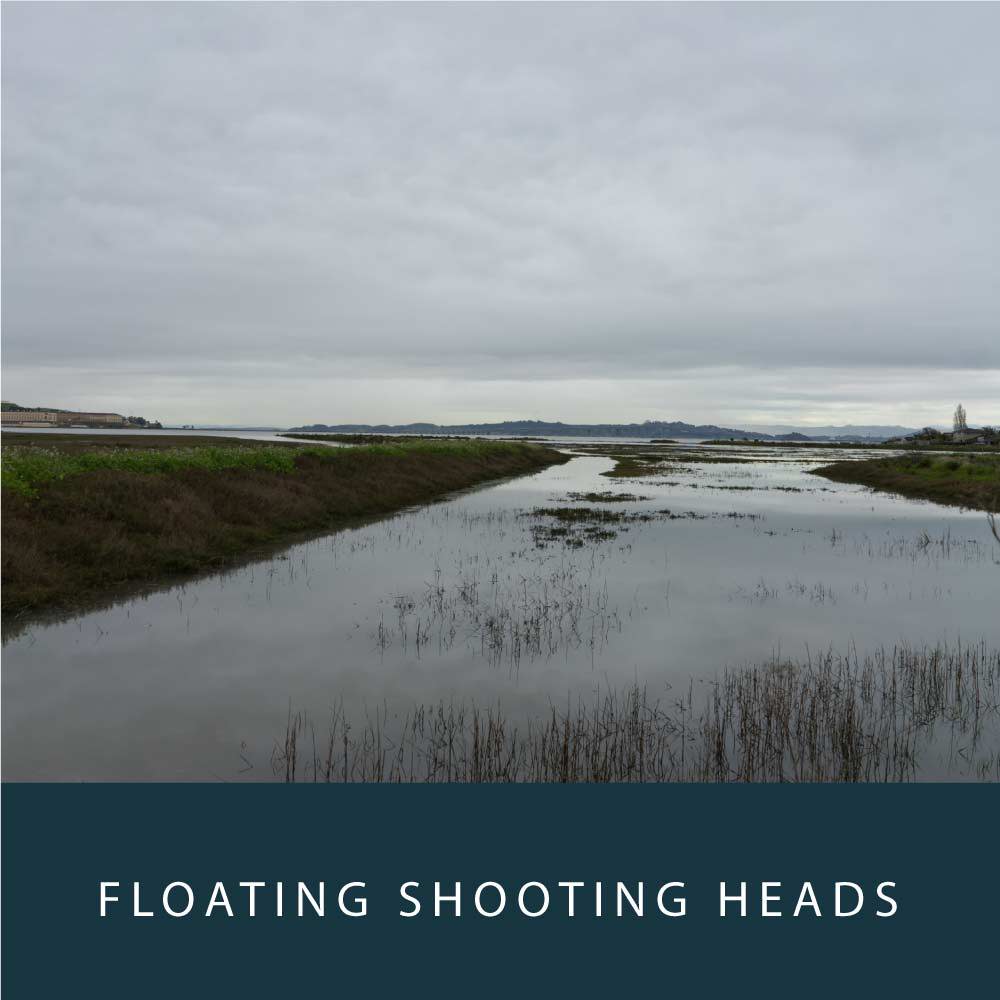 A floating shooting head is great for shallow areas like a tidal flats and sloughs. Floating shooting heads are great for fishing poppers and crease flies on the delta and bass ponds/lakes. Sometimes a floating line allows for fishing subsurface patterns in close to shore or keying in on those fish feeding just below the surface on baitfish like we see all too often in the San Francisco Bay. It's a line we don't typically use as most anglers will have a fully integrated floating line. 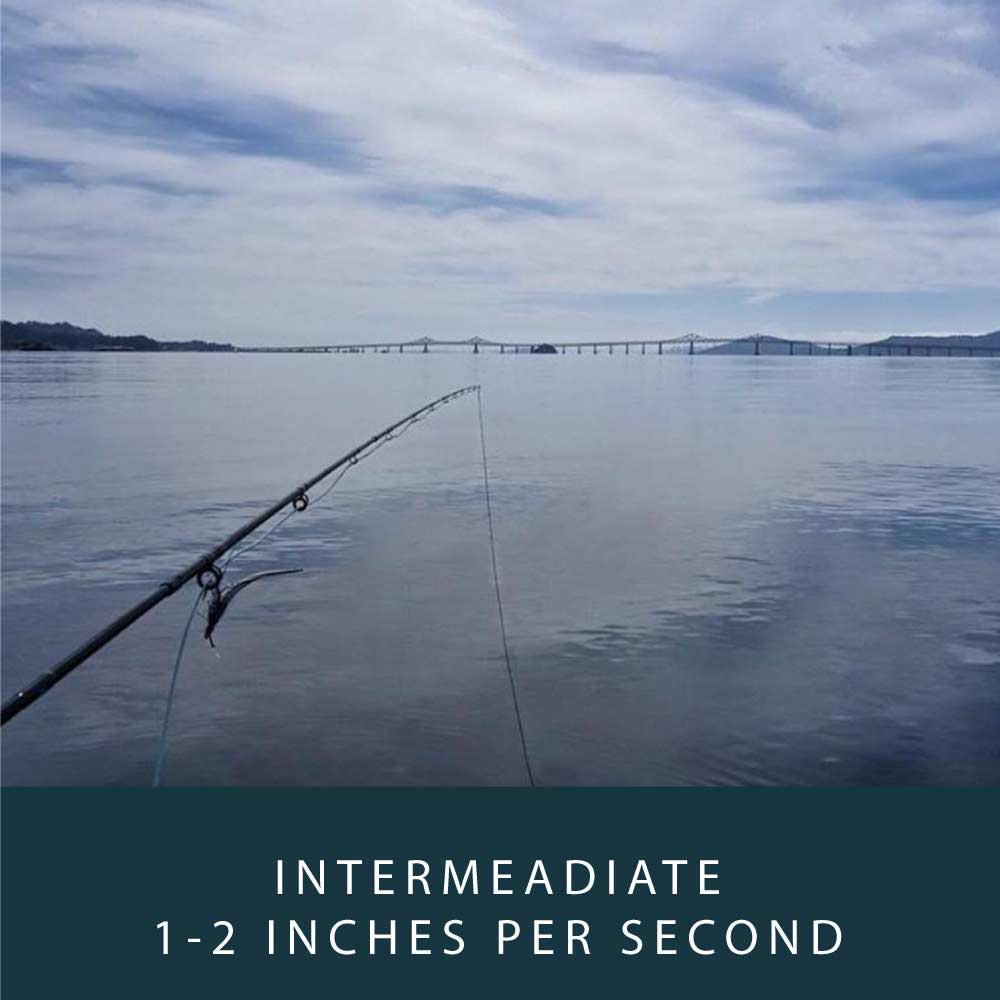 The intermediate head is definitely a must have for any angler trying to key in on fish in the bay.   The San Francisco Bay is surprisingly shallow at an average of 12-15 feet deep. Keep in mind that this number is skewed by the 300 foot depth under the Golden Gate. Most of the water you’ll be fishing from shore will be somewhere between 3-10 feet deep. Striper will typically push bait up near the surface making a intermediate head a great choice for fishing inside the bay and local sloughs. 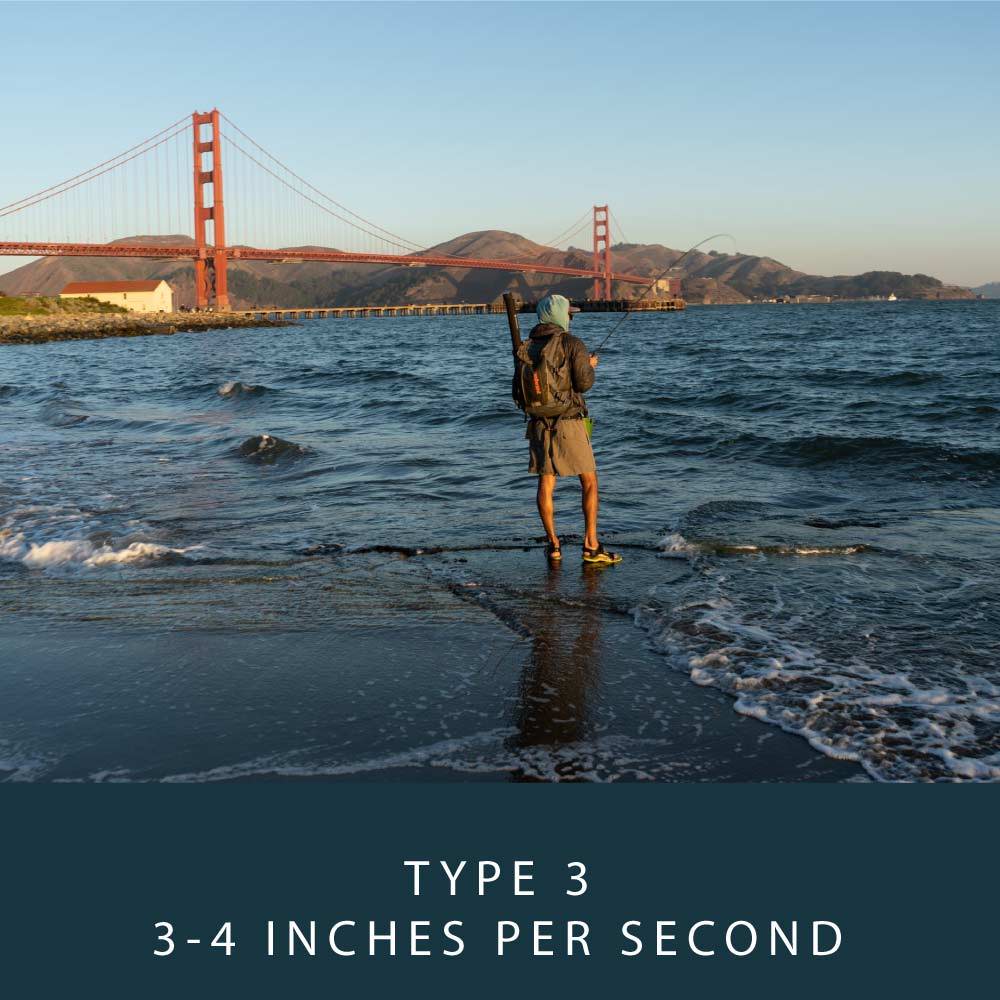 This is our favorite shooting head for Crissy Field and calm conditions. This is your in between shooting head which is fitting because Crissy is a perfect example of calmer surf conditions being just inside the golden gate. This is also a great line for calmer surf conditions at more shallow gradient beaches. We have done really well out at Stinson when the conditions line up with a sink 3. Aside from surf fishing this is a great head for shad fishing and steeheading. This is definitely a must have. 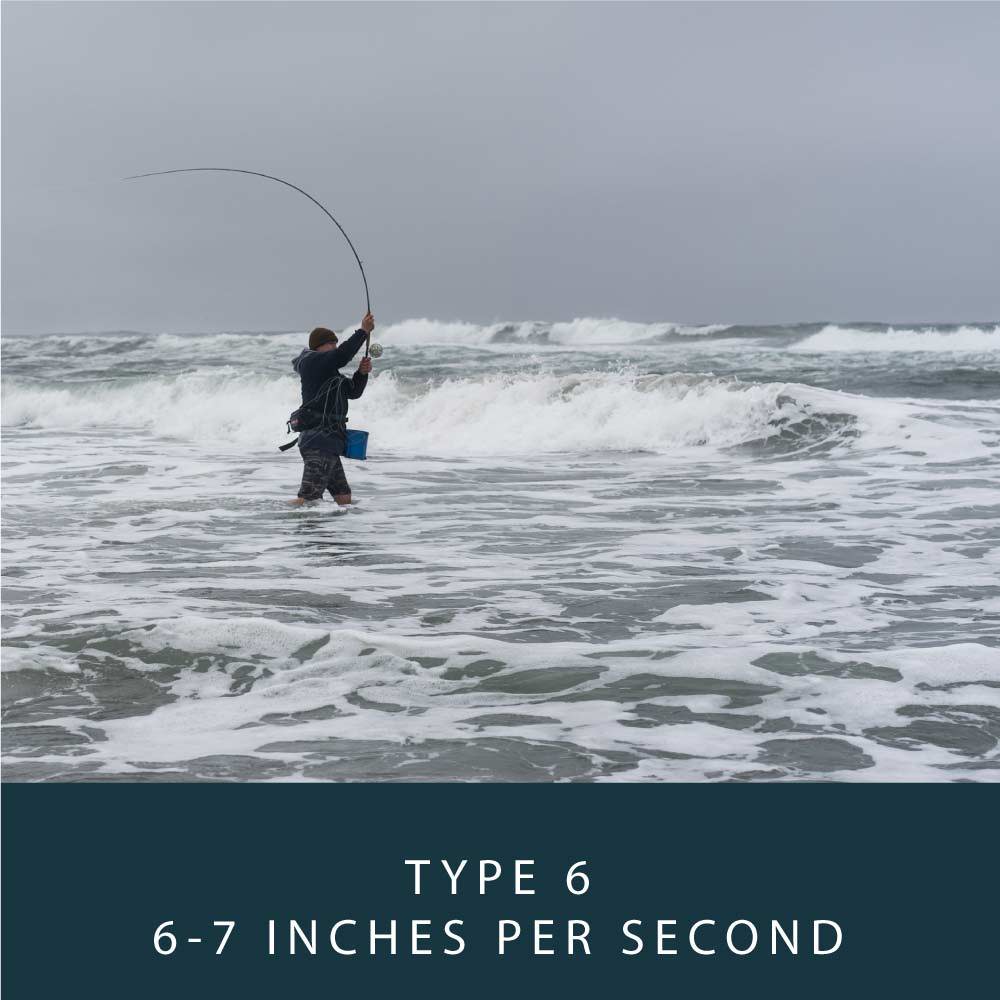 This is a great line to have for anywhere outside the golden gate. Whether you’re chasing tanks out at Ocean Beach or trying your hand at some winter perch fishing up at Stinson, this line will get down to the fish. The most important thing out on the coast is to make sure that your line gets down through the surface turmoil of the surf. This heavy fly line does exactly that and will help you to keep line tension through the push and pull of the whitewater. This a great fast sinking line for beginning surf anglers. 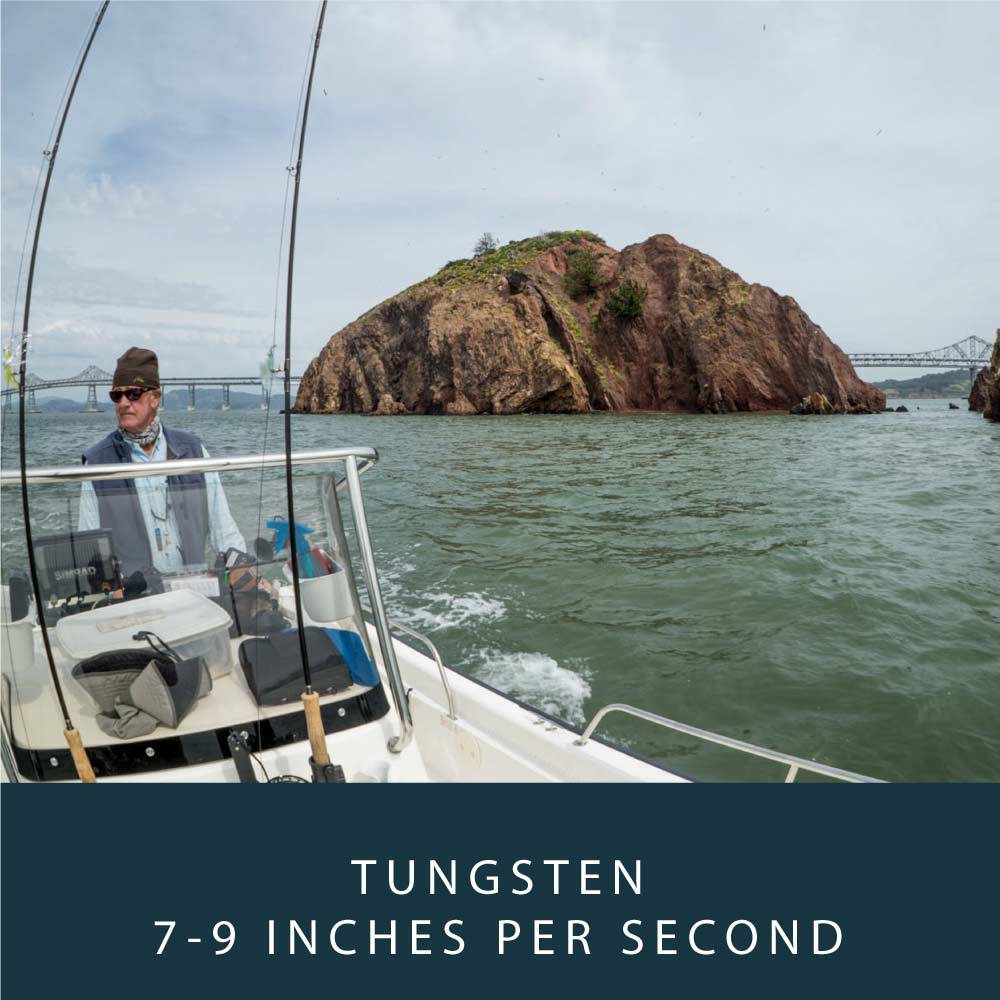 Tungsten lines are extremely dense and allow us to get down as far as we want in the current. Tungsten lines come in a variety of different weights T-8 (7wt) , T-11 (8wt) , T-14 (9wt) , T-17 (10wt) These lines are level, meaning they have no taper to them, so they tend to not be as easy to cast for beginners as the Outbound Shorts from Rio but we’ve been extremely impressed with their performance out on the water. Their thin diameter makes them a little nicer for cutting through the heavy winds all to common on the beaches. 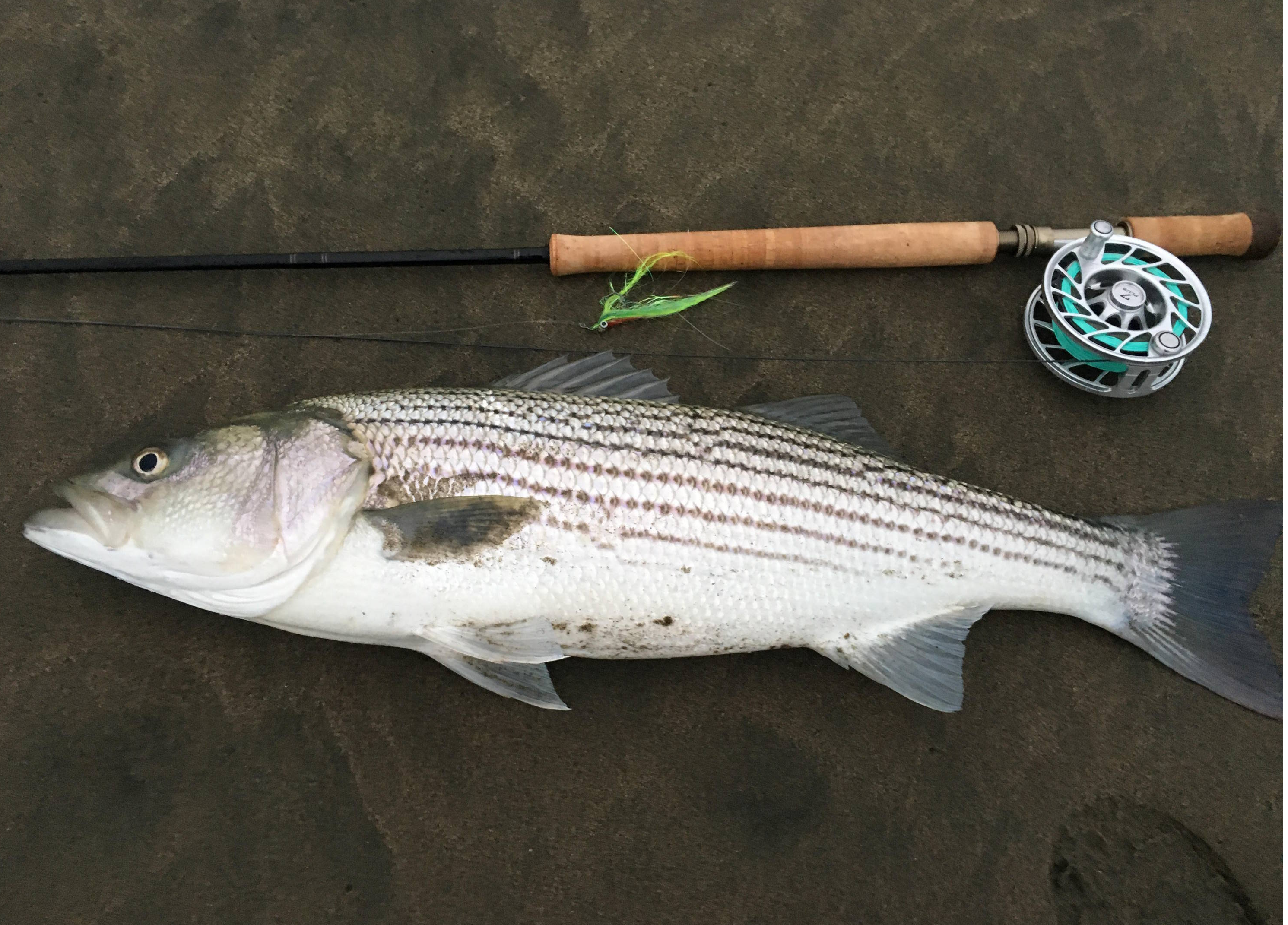 An integrated fast sinking head with intermediate running line that glows in the dark. A great line for fishing outside the bay or from a boat in the bay and delta. If you are a boat angler fishing 7-20ft of water this is the right line for you and what I have loaded up on the Whaler ready to go.

The fastest sinking integrated sinking head with intermediate running line. A great line for fishing outside the bay or from a boat in the bay and delta. Choose the T-11 for 8wts and the T-14 for 9wts.

Methods To Sink Your Fly

Shooting heads for fly fishing the surf come in a variety of different densities. Float, Hover, Int, S3, S6, and S8 to help you get to your desired depth. 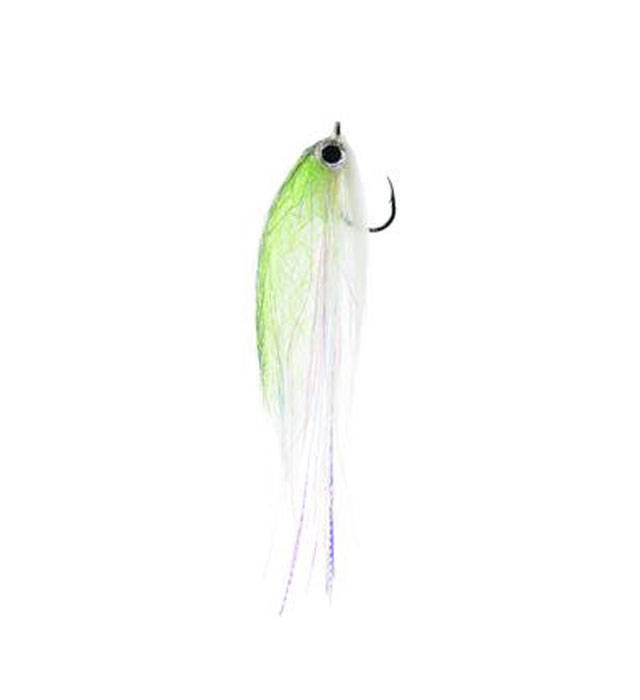 A long leader (4-7ft) with a heavy fly, like the Adachi Clouser, is a great way to get down quick, but it can be more difficult to cast, because the mass of the fly is further from the mass of the sink tip and the head. Conversely, if you have a light fly, like the looks better wet, that you are try to sink use a shorter leader (2.5-3.5ft) to keep tethered to your shooting head to avoid the fly floating above your tip.

Lifting your running line over and incoming wave or putting your rod tip in the water can both increase your ability to sink your fly. 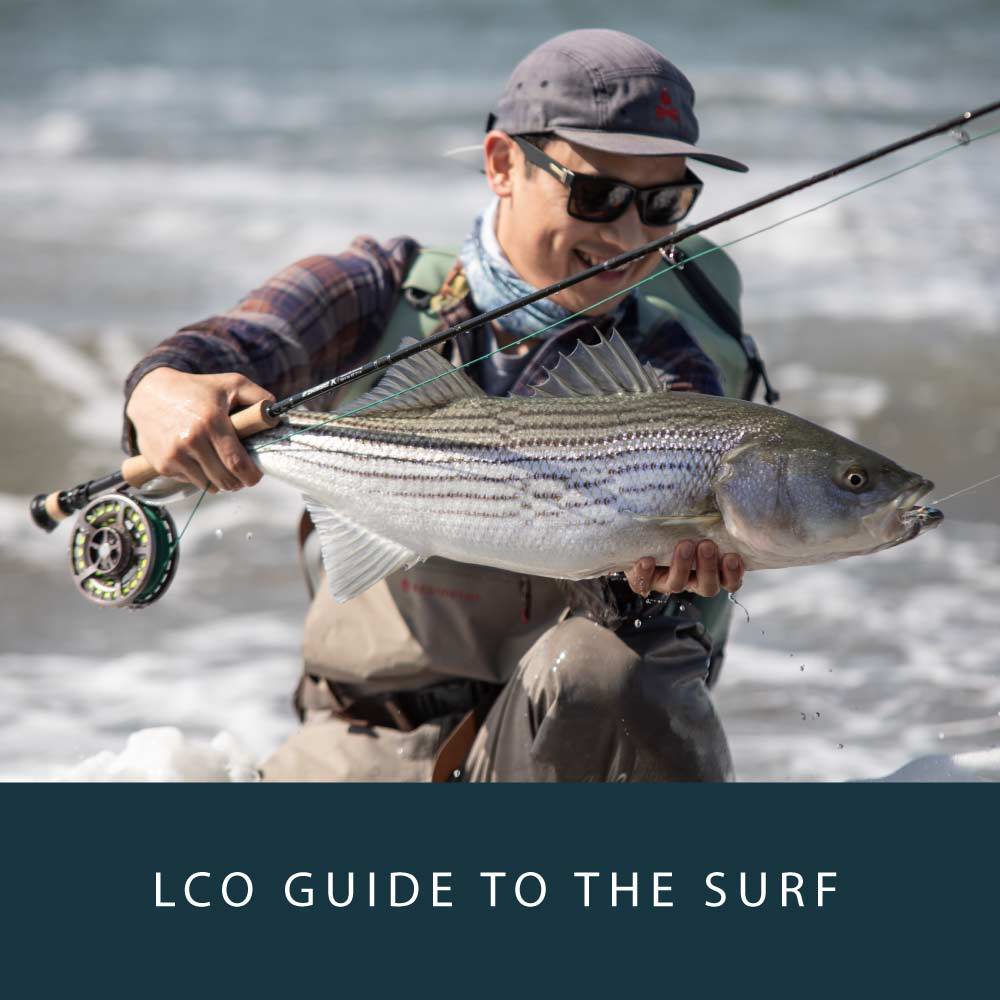 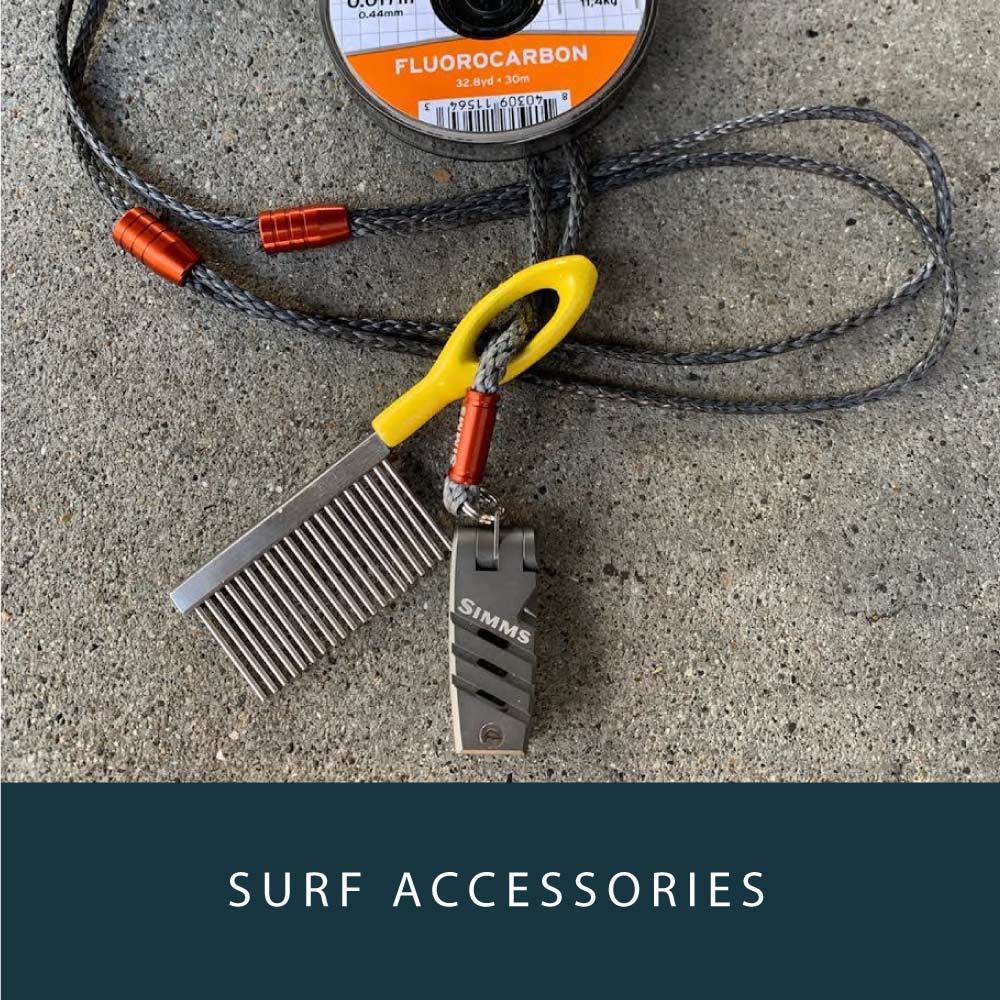 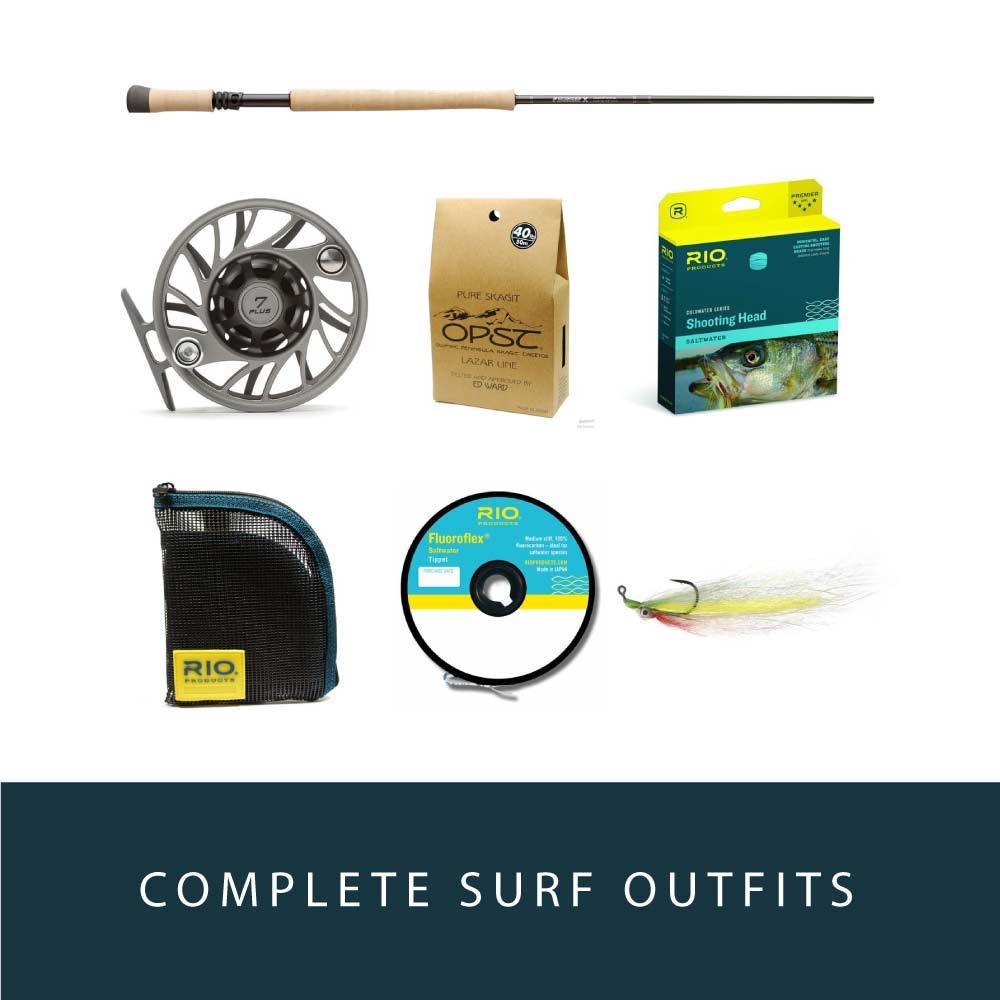 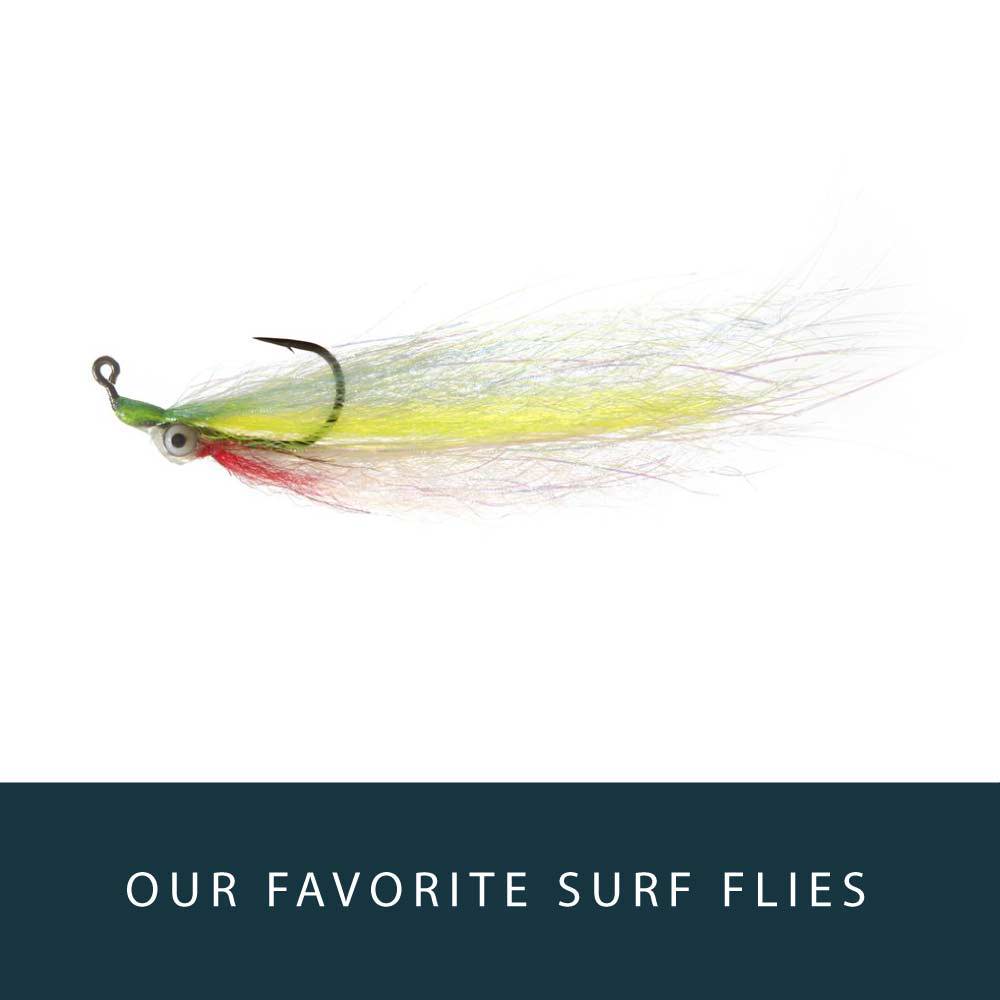 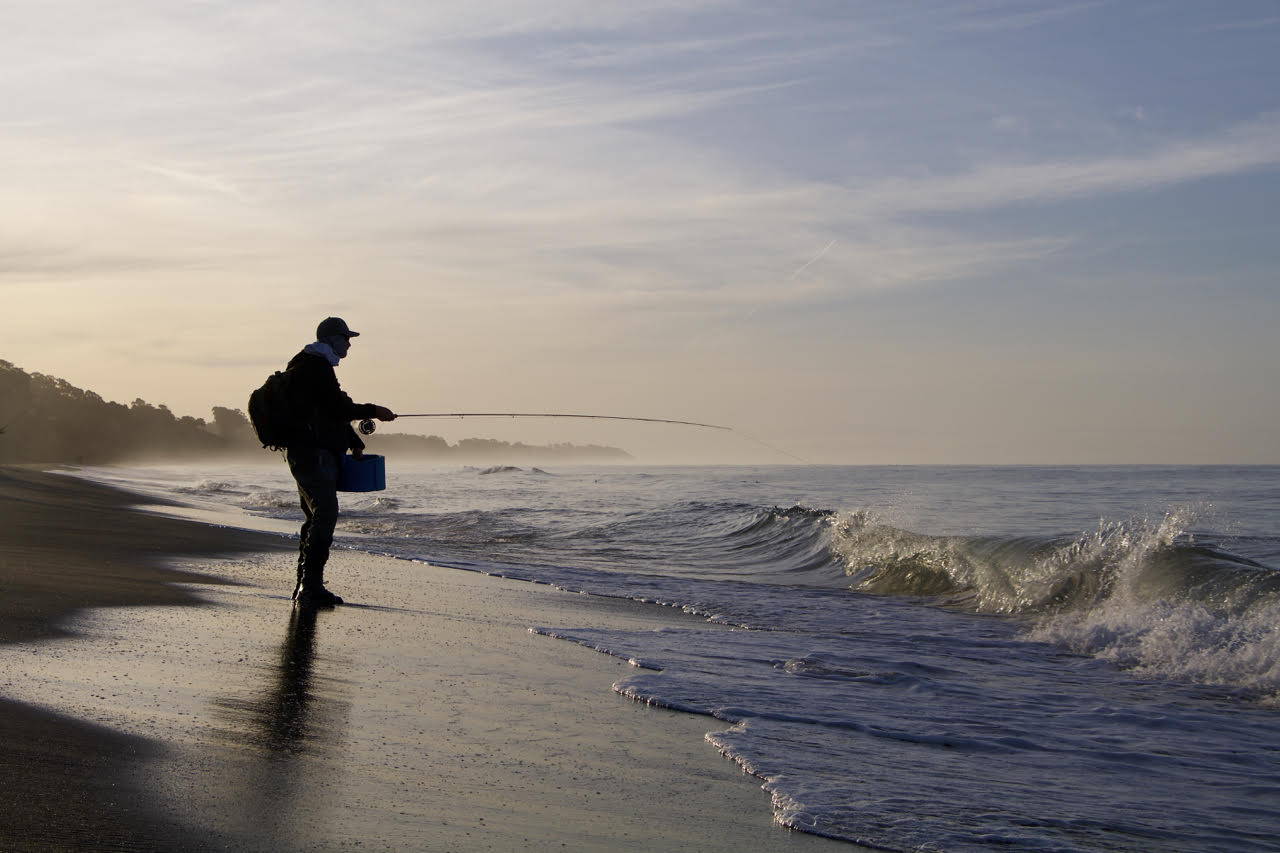