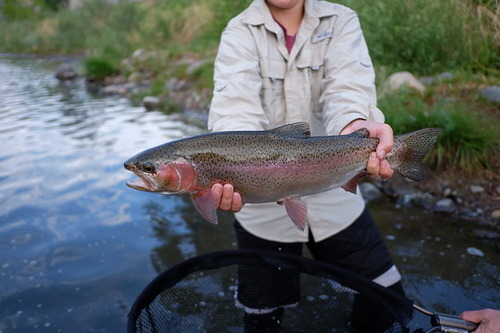 I’m surprised we made it this far. With the current state of drought in California, I’m surprised the river held out this long. She’s running half of what she was last week, about 184 cubes here in the Hirsh. For now, albeit low, the Truckee River is fine. There have been a lot of rumors and over dramatizations that the river ran dry and fish died. That is not true. The watermaster, overnight, without any regard to fish, stopped flows coming out of the Little Truckee arm below Boca. That arm feeds into the Truckee River. Fish got stranded, some fish died. Volunteers helped rescue fish the next day. Yes, we are in dire need of some water. I’ve seen the river very low, much lower than this. The most recent was fall 2004, and fall 2009. For now, the fishing is still good in the mornings. Carry a thermometer, and if temps get too warm, stop fishing. I took a river temp today near Farad, it was 61 at start time, and 66 at end, not bad at all. I’ve seen not a single dead fish in the Truckee River, and I don’t think we will, at least for the time being. Trout don’t suddenly commit suicide when flows get lowered, geez. Conditions could get worse. I’m just really praying we can make it until fall and some rain starts falling.