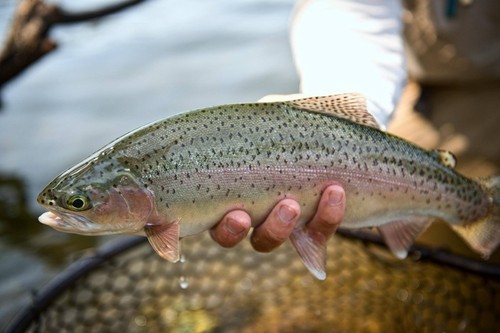 The Lower Sacrament River remains a great trout fishing option this summer. Recently, we’ve been seeing both quality and quantity up and sown the river, from downtown Redding to Cottonwood. Despite the lack of hatches the fish have been eating well throughout the day. Fish don’t seem to be too keyed in on any specific bug, its just important that you put those bugs in the right spot. Not many drift boats out on the river recently either. Flows are currently sitting at 7500 cfs and are projected to drop down to 3500 cfs by October 1. This is actucally a really good thing as it will reduce the amout of salmon redds that will be left high and dry like last season.

Lower Sacramento Trout – Trout fishing on the L. Sac has been fair to good. Being on the “right float on the right day” is key but there is no control over that. I floated a few different stretches lately and had fair to good fishing on all of them…some days are better “big fish days” others are better  “number days” just depends. Salmon seem to be MIA as salmon fishing pressure up through the barge area is pretty light. I did see a full parking lot at Woodson Bridge though on the way up river the other day so maybe the bulk of fish is down lower still. The word on the street is that the river should be dropping to 3200cfs by Oct 1, this is crazy low but again very similar to the Yuba in that atleast the spawning salmon won’t get their beds left high and dry. Look for the egg bit to get going mid to late October and the steelhead fishing to get going in the lower river around the same time.

Lower Sac Striper – Striper fishing remains pretty good. Getting away from the salmon anglers is key but there some really big fish around. Striper fishing can remain good through October or until the river blows out. Just seems that most people loose interest or focus on the fall trout and steelhead fishing or turn to the delta for stripers.