Written by George Revel
Filed under
Pyramid Lake
Previous
Matt Koles, Gilligan’s Guide Service
We are getting more fall like weather here in the Lake Tahoe-Truckee-Reno area, and yes I know it’s almost November, but thanks to climate change, our fall weather pretty much starts around November in Tahoe these days it seems. Low last night in Truckee was 18, not as cold out at Pyramid Lake, but much colder out there than the last few weeks. Water temps are cooling and putting fish in closer to the beaches and in fly rod reach. I think most Truckee locals are on the believe when I see it approach, but there is snow in the forecast for Saturday. Very good news. Surface temps at the lake have lowered to 59, and with this colder weather, we’re not far off from it really happening out there. Float tubers and boaters are still doing better than the beach dudes, but the beach guys are catching some and with a good wind blowing in, you’ll probably fair pretty well. Get the stepladder ready cause it’s just about time. 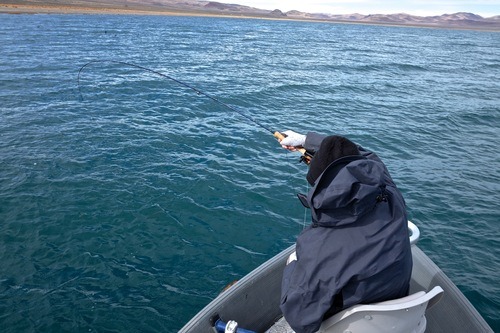 ———————————————————
Doug Ouellette, Calvada Fly Fishing
Over the last few weeks with the cooler days and nights the water temps at Pyramid have gradually been dropping. Last week the temps were around 62 degrees at the surface, yesterday it was at 58 degrees. With these cooler temps more BIG fish should be coming in closer to shore. Although some BIG fish have been caught from shore, most fish have been caught in about 20 feet of water from boats, and float tubes. It is an exciting time to be fishing Pyramid.
Pyramid cutthroat are known for grabbing many different fly patterns, that being said, Tui Chub patterns. popcorn beetles, black/red woolly buggers, and large midge patterns in red and black are still the top producers. Last week a 21 pound Pilot Peak fish took a #8 original popcorn beetle from shore!
As anybody that has fished Pyramid knows, the WIND situation is very important. Wind direction and speed are huge factors for consistent angling. On my website www.pyramidlakeguideservice.com  on the HOME page there is a weather button that maps out the wind direction and speed. This is an essential tool that can and should be utilized.
There are still a couple of spots left for our next Pyramid Lake clinic on November 8th.
Good luck, have fun!
Doug O.