This report is emailed out every Thursday at noon. You can receive it as soon as it comes out by signing up here. The Northern California Fly Fishing Report. 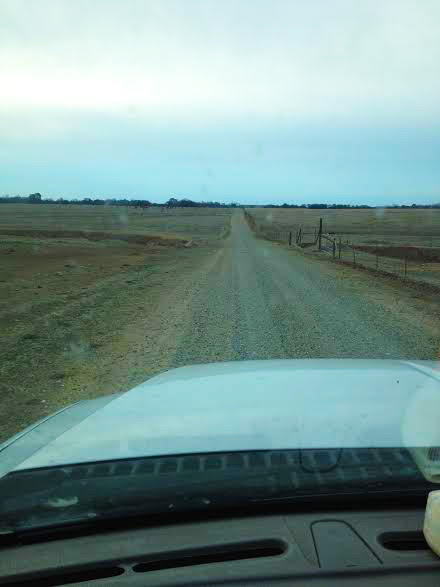 En route to fun! Who doesn’t get excited once you hit dirt roads?

Hogan Brown reports:
Flows are around 3840cfs coming out of Keswick and did jump up the last week from 3319cfs. Not a bunch but any increase in flow is a good thing at this point. I have been floating from Bonnie View down to Anderson and fishing has been fair. Mostly I am catching small fish (12-14") with a few fish in the 16-18" range with the occasional bigger fish or steelhead mixed in. We did catch some bigger fish the day after the last rain as the river did pick up a bit of color…kinda weird but I guess makes sense. Fish seemed to be spread out in all types of water from the flats to the riffles.  I did hear that a few people floated the upper stretch from Posse Down to Bonnie this last weekend and caught a few bigger fish but medium to smaller fish seem to be the name of the game from what most guides I know have been saying. Good bugs have been beads/egg patterns, #18 S&M’s, #14 trim flashback PT’s, #16 copper bead birds nest, and on warmer days #16 Zug bugs. 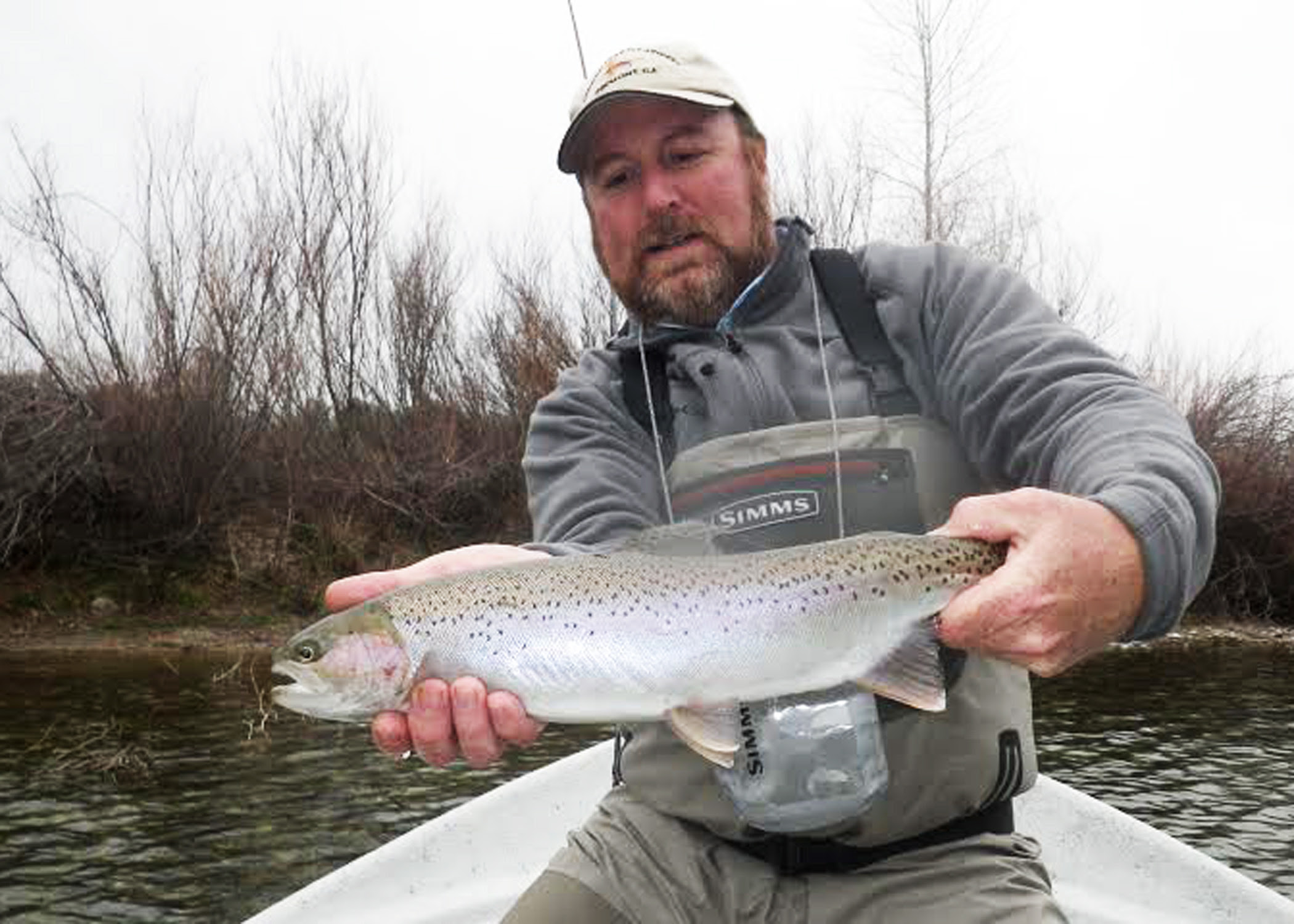 The payoff at the end of the road.

Jordon Romney reports:
We are experience some unusual high flows for this time of year.  Berryessa still has a good amount of water in it and with the drought situation the farmers are calling for water.  Typically we do not see the flows reach these levels until the end of May.
Putah Creek Trout differ from typical rainbows by spawning in the winter months.  We are reaching the end of the spawn so there should be some really good fishing in about a month.  I shut down my guide service on Putah from December through the end of February to let the fish spawn in peace.  I will be back guiding the creek the first week of March which is one of the best times to fish out there.  Be careful wading areas of the creek where the fish spawn.  The eggs and fry are still very vulnerable at this stage and stepping on them can devastate the success of the fishery.
The fish will be on the feed to get some energy back.  Small midges and mayflies are the staple for this creek.  My favorite midge pattern out there is a black pure midge larva in a size 20 or 22.  When it comes to mayflies Sloan’s mighty may or a two bit hooker tend to fool many fish in a size 18 or 20.  Attractors work great in fast water.  Go light on tippet 5x to your first fly and 6x to a dropper.  Make sure you get your flies down. Below is a link for a cool spawning video: 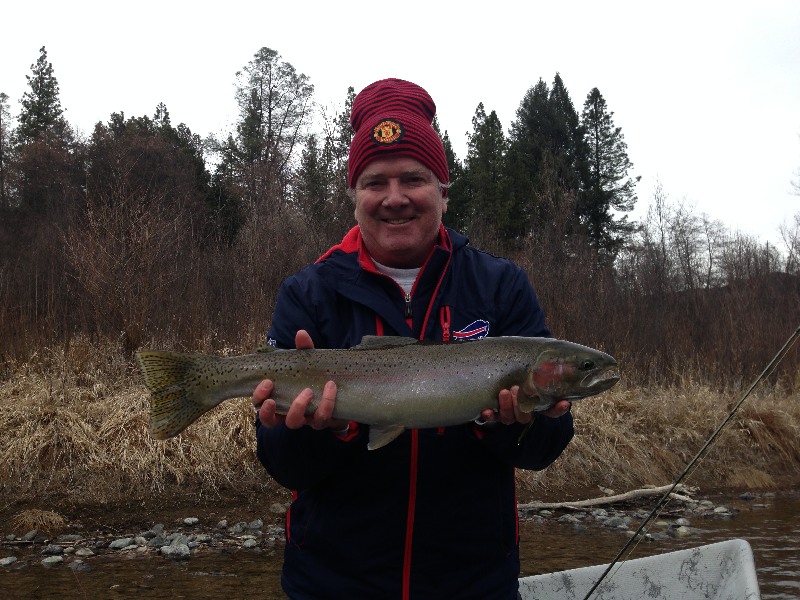 Solitude Golden Stones 8, 10
Red and Blue Copper Johns 12-14
Flashback Pheasant Tails 12-14
and the occasional Clown egg.
If we keep getting warm days in Feb there should be an amazing Spring Caddis hatch. There will be dry fly action.
I have opening Feb 12-2 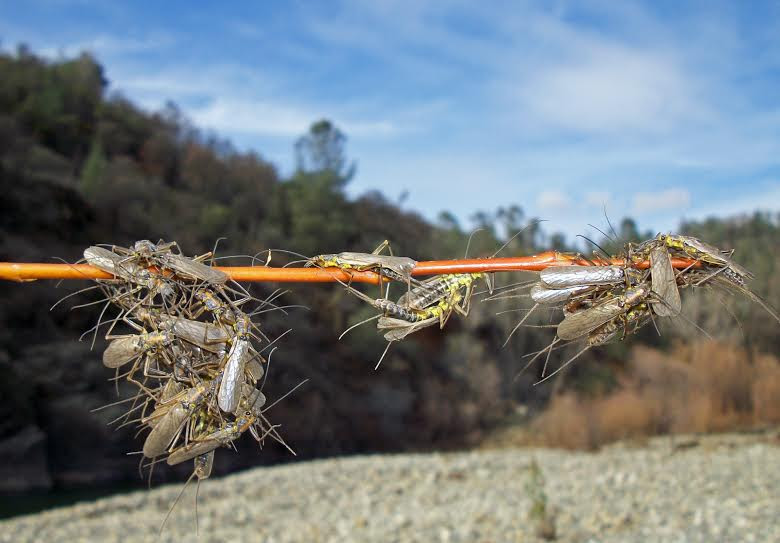 The last week on the lower Yuba has been pretty good. The skwalas are out big time and last Thursday was the biggest hatch I have ever seen on the river. Epeorus mayflies (pinkies) and BWO’s are also present. The fish are taking them all with perfect presentations and zero drag in both the skinny side water, and the seams of major runs. Effective dry flies have been Tom Page’s flush floater skwala #8, the skwala unit #10, and Quigley’s hackle stacker (pinkie verson) #16. 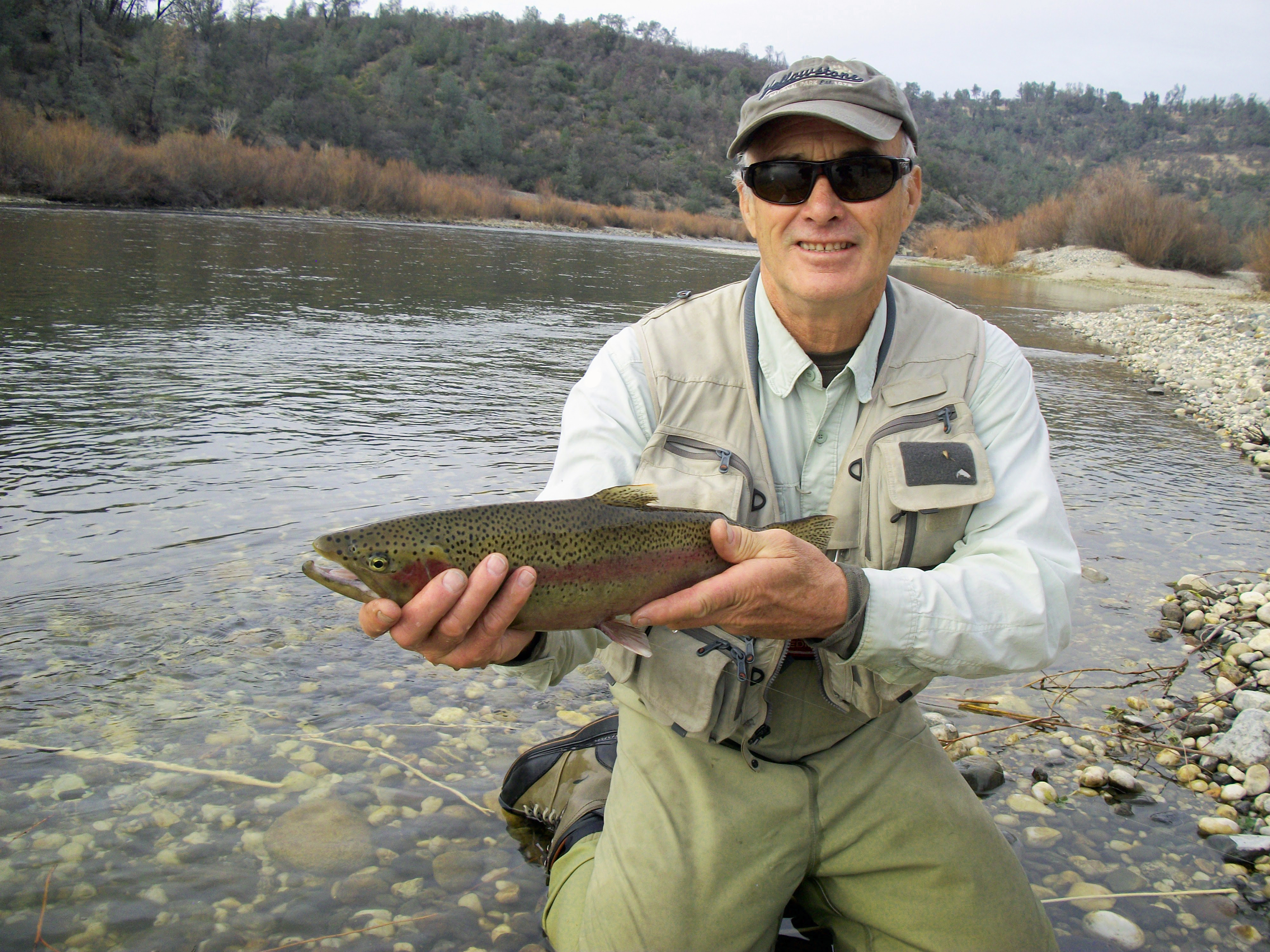 I have not fished any nymphs due to the dry fly fishing being so good but there is a bunch of salmon smolts in the system and an angler should swing some minnow patterns.  Flows are still low at 720cfs and the river is very clear. Careful observations, and stealth is absolutely necessary for success.

Hogan Brown reports:
Flows are around 700cfs and as clear as they can get. I had clients on the Yuba Sunday and fishing was tough - fair. The river was crowded and at 700cfs there is not a ton of room to fish when there are wade fishermen, drift boats, and pontoons boats out. The skwalas are out but mainly concentrated above the bridge or around the bridge area. I did see skwalas around from the bridge down to the dam but very few ounce we got past the first few runs and from what I have heard they are pretty thick above the bridge. There were sporadic baetis hatches and a few fish keyed in on them at times but most rises I saw were typical Yuba “one and done” rises. Most fish my clients hooked were in deep runs and flats. I found that fish seemed to be concentrated in the deeper water. Riffles that usually hold good numbers of fish are to shallow at 700cfs to hold many fish or really fish affectively out of the drift boat. We did hook a nice fin clipped steelhead and good healthy 12-14" rainbows. Most fish came on egg patterns and small nymphs with no clear preference for anything in particular…#14 Flash Back PT’s, #16 S&M’s, #16 Olive Fox Pupa, #14-16 Red Copper John all caught fish. Fished a bunch of rubber leg and skwala stone fly nymphs without any luck. One thing I did do was lighten up my normal weight and even in some spots shorten the drop from my indicator to my weight. Overall the Yuba needs some color and more water I think to really get going but fishing is still fair with the current conditions.
Coming Up… March on the L. Yuba and L. Sac is traditionally one of the best months to be on the rivers. March Brown, spring caddis, PMD’s all start hatching and really kick trout into a a spring feeding binge…Spring steelhead should be interring the Lower Feather over the next month in a half and nymphing and swinging flies should start to hook a few spring fish. Resident stripers in the L. Sac are going to start going on the feed over the next few months and large and smallmouth bass are going to start waking up on the L. Sac as well.

Bill Lowe reports:
Skwala stones, PMD’s, baetis, and March Brown are all available on these sunny “Aprilesk” days.  Fish the edges and Shallowater with your favorite dry fly patterns before you resort to the indicator… It’s way more fun to ski the powder than the crud!  Top producers have been Thalkan’s double Dutch, Size 18 BWO compareadun, Size 16 PMD sparkle dun, and swinging a size 14 tan soft hackl 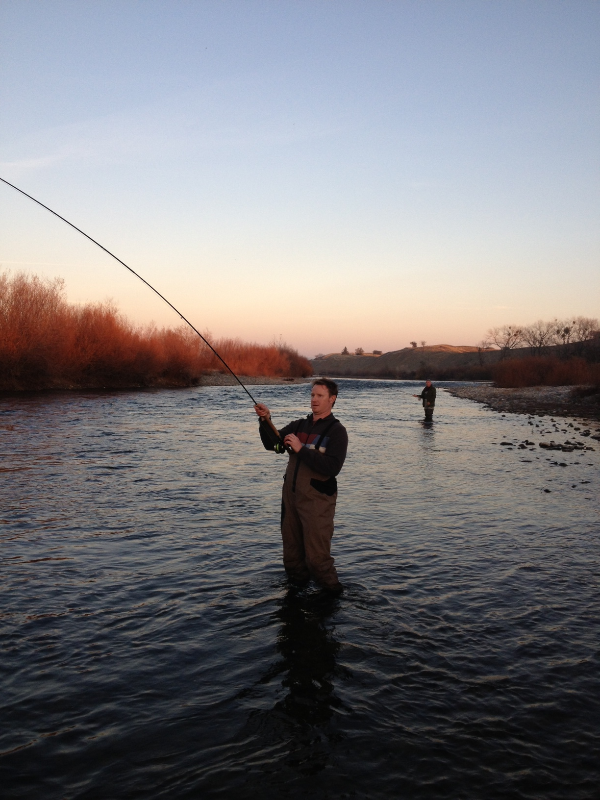 Neil Forsythe getting all bent on the swing!!

Bill Lowe reports:
Despite record low flows, the winter run steelhead are still programed to return to Valley Rivers for their spawning and it is happening.  A proposed closure to the fishery may take effect February 6.  Please stay out of the spawning beds below sailor bar… That’s where the “salmon fry shuffle” takes place for Black Chrome! 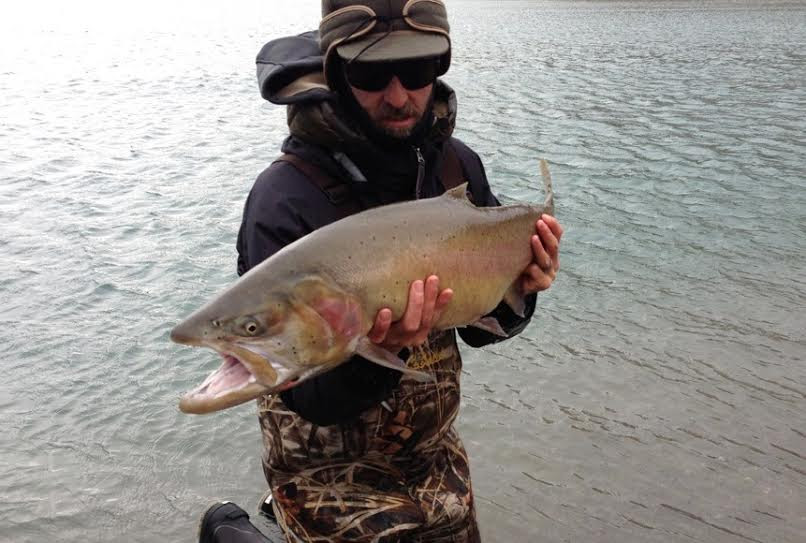 Hoisting a nice one!

Matt Koles reports:
The Truckee River is fishing well with the recent rain and snow. The river actually got blown out/muddy this last week, that is great for us- much like a Steelhead river. It feels a lot more like winter now in the greater Truckee-Tahoe-Reno area, if you do come to fish, dress in layers and be prepared for cold temps. Often with cold water-air temp, trout on the T move to slower deeper slack water. You must hit them on the head so to speak. Flows are great and access to the river is not a problem near Truckee as snow is a non issue. In Nevada you need not worry about snow and fishing is generally better in winter with warmer water- air temps.  All over the river you’ll need baetis-midge combo mostly fished under an indo. Not to may fish on top yet, slow and low is the tempo. Flows are great and often in winter we get the big feeders, not the small fish.

Matt Koles reports:
Pyramid is the place right now if you want to tangle with the fish of your lifetime. It’s a winter-spring fishery, and fish up to 20lbs have been caught lately. Call 775.351.6665 for more info about the lake. 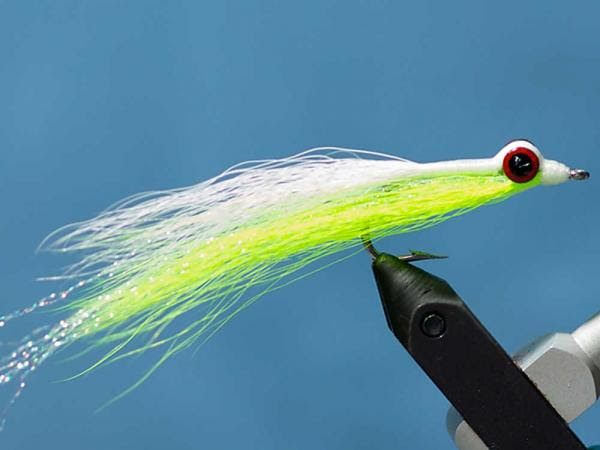 Steve Santucci reports:
The Delta is fishing well with lots of action on stripers and largemouths.  Using a 2/0 chartruese over white clouser for most of the time.  This last week we caught good numbers but most of the fish were in the 15 to 18 inch range with an occasional keeper.