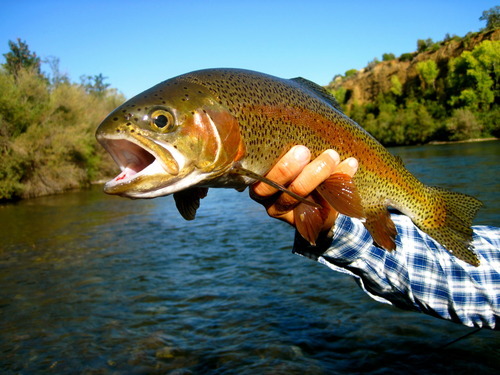 The Lower Sac is happening right now. The Kings are still slowly starting to cut redds and spawn. The spawn is definitely a little late this year compared to the previous few. This is most likely due to the higher than normal water temperatures. Eggs are catching fish throughout the river when put in the right spots. Other than that, little baetis and small caddis are gettin’ em as well. With a delayed spawn for a lot of these kings, November could be another great month to be on the Sac.
Steelhead are lurking in the lower reaches.
I’ve still got a few days available in November.
—————————————————
Dave Neal, Reel Adventures Guide Service

I’ve been on the Lower Sac nearly every day this week with a few days on the Trinity along with some walk & wade spring creek waters up the hill. It’s really tough to decide where to go fish right now in Nor Cal as there are many, many, options.

Lower Sac flows are just under 5,000cfs. The water has been a little warm at 61-64 deg (which is warm for the L Sac in October). Not sure if it’s Shasta Lake turning over, or the cold pool dissipating in the lake, but it’s been a little interesting. We’ve also had 95 degree days this week, which doesn’t help.

The king salmon (there are a lot of salmon in the river right now) have gone on hold lately and still hanging out in the deeper holes. Not many digging redds this week and lots of weeds still. Seems that the prime time egg drop may lag another week or so? Maybe they don’t like the blood red moon…LOL

Even though there are few salmon getting busy, the trout are still on the little round bug (eggs). It’s far from red-hot right now some would call it the calm before the storm. Any given day it’s still possible to hook a few nice trout along with a steelhead or two in the middle river below Anderson.

One thing is for sure if you are not out fishing right now, or planning a trip soon, you’re missing out on a great time of year! I’m completely booked for the rest of October and November and early December. Next open dates are December 16th on… January, February and March offer fantastic trout and steelhead options in Nor Cal so if you missed the boat this fall, do not worry. It’s a long and variable season. Get out there!!